Dare to care was a collaborative charity event by KL Property Developer SkyWorld and Star Media Group which focuses on helping unprivileged homes in the Klang Valley.

Last December, Star Media Group and KL property developer SkyWorld teamed up for #DaretoCare campaign – a collaborative charity drive that aims to further enhance the public’s awareness on the needs of unprivileged homes in the Klang Valley. This CSR project was also made to encourage and at the same time inspire the local community to give a helping hand by donating – whether it’s big or small.

Datuk Seri Wong Chun Wai, CEO and Group MD of Star Media said “This campaign is one that matters greatly in this time and age when most companies are dialling down on spending for CSR projects because of the economic downturn. Instead of doing the same, we choose to do the opposite.” 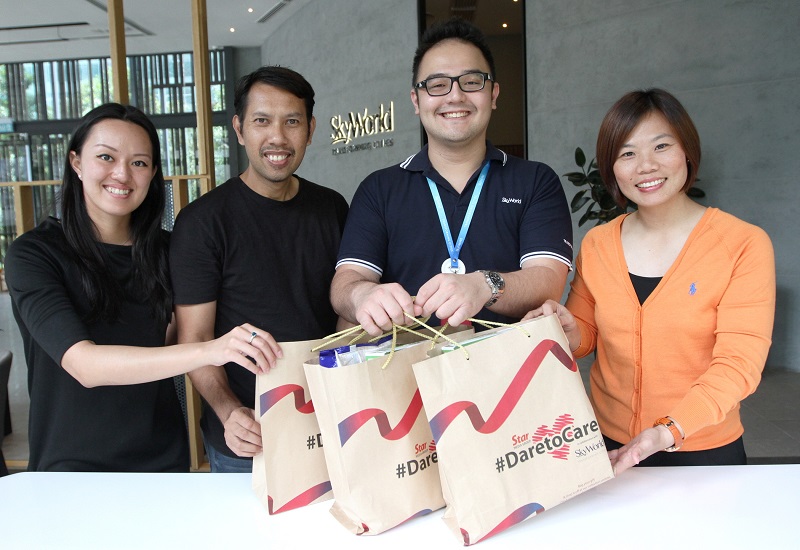 Meanwhile, Founder of KL property developer SkyWorld Development Group Datuk Ng Thien Phing believes that as part of the property development and investment business, the campaign coincides greatly with their mission to enhance the living experience of the community. He shared “A big part of our job, as a KL-centric city developer is to provide the ultimate Sky Living experience in a sustainable and wholesome environment. Since the inception of SkyWorld, we have gone through buoyant transformation progress. We want to live by our motto of transforming the city and what better way than to collaborate with The Star, in our aim to transform the lives of the underprivileged society.”

The campaign started last December 17 with the distribution of the first batch of 50,000 Star newspapers placed inside brown paper bags. These paper bags were distributed to selected areas within the Klang Valley. The following day, December 18 was the start of the nearly 2-month long duration for the paper bag drop off at SkyWorld KL property galleries.

People who wanted to donate went to these designated KL property galleries and handed over brown bags with essentials. The second batch took place last January 13 where donors filled up paper bags with essentials that will be given to unprivileged homes at the Klang Valley.

Suggested donation items include some household and personal care items such as toothpaste, toothbrush, new clothes, shoes and uniforms as well as dry food and stationeries such as note books, glue, pen, pencil, eraser and scrap book.

The campaign ends on February 15 – the last day of dropping off paper bags to select SkyWorld KL property galleries.

SkyWorld Founder Ng said that the CSR project was a good way to introduce welfare homes to the public – giving them exposure and the chance to somehow reach out for help. And teaming up with The Star – the “People’s Paper” was indeed the perfect platform to start the charity drive.

Aligned with the company’s contribution to society, SkyWorld builds affordable KL condo through the Federal Territories Housing Scheme (RUMAWIP), which SkyWorld had taken part in with its SkyAwani series. SkyAwani homes will be the first condominium in KL under RUMAWIP in compliance with the Quality Assessment System in Construction (QLASSIC) standard. So far, SkyWorld has successfully launched 1,934 affordable homes under its Awani 1 & 2 developments and will unveil 1,905 more affordable homes with SkyAwani 3” he added.

Aside from attracting the public’s interest, a number of well-known personalities also joined in to help with the campaign. Beauty queens Samantha Katie James and Lee Yvonne have both been very active in many charitable organizations and said that the #DaretoCare campaign was another chance to show people that there are ways to help out. Meanwhile, PR maven Selina Yeop Jr and KL Lifestyle Art Space founder Datuk Gary Thanasan both were very much supportive of the CSR project to give a hand to the less privileged ones.

If you’re looking for a new property in KL that is value for money, you can check out SkyWorld website for more information.